I have spent the majority of my life looking for somewhere to fit in—for someplace to belong. I have always felt out-of-place, out of touch, or not interesting enough for people to pay attention to me. It wasn’t enough that I was socially awkward and was left out more than the other kids, but I also had no real sense of where my family originated from. With an absent father and my mother gone at such a young age, I couldn’t ask these questions. As far as my Grandparents were concerned, we weren’t African and we had “Blackfoot Cherokee” blood in our family.

In 5th grade, I remember working on a history project where we had to research our family history. We were to interview our parents in order to get more information on our immediate family. Except, I couldn’t actually participate because I had no contact with my father at that time and my Grandparents could only provide me with information from my mother’s side. So my teacher had me complete the project based on the information my Grandparents could give. I was embarrassed by the final product. My family tree was lopsided and incomplete. Because my Grandfather was adamant that we had Native blood, I put that in my report. The teacher told me to choose the American Flag to represent my country of origin. Even at age 11, I knew in my heart that this was an inaccurate depiction about who I was and where my family came from.

After that project, I spent some time asking more questions about my ancestry. I felt disconnected and more alienated than I already was by other kids who had these answers. I was left confused and misinformed about my ethnic identity. I remember a time in 7th grade where I told the teacher that the ethnicity box on my standardized test was incorrect because it said “African-American.” I told her that I wasn’t only African-American—I was Native American, too. The teacher—who happened to be white—looked at me, blinked, and simply told me to check off the appropriate box. So I checked multiracial. When I think back on that moment, it disturbs me to think that I thought that being black wasn’t enough. Or that being “multiracial” was a status symbol of some sort. As if being something other than black made me exotic or desired.

Into my adolescence and the re-introduction of my biological father into my life, I continued to search for more answers. I was disappointed because I still wasn’t able to get more information. My father could only provide me with similar information that my grandfather did: we had Native blood and considered ourselves to be black. But what did that mean? Everyone has to come from somewhere, right? I still didn’t have these answers and it both embarrassed and frustrated me.

In college, my friend group was ethnically diverse. I had friends from Haiti and Rwanda, and other friends who were born in the States but could speak another language and had knowledge of their heritage. I was envious. I wanted to be “exotic”. I wanted to speak another language and have parades and festivals for my culture. It was so painfully embarrassing for me to answer “I don’t know” every time someone asked me where my family was from. I was torn between knowing the fact that all black people originate from somewhere that isn’t America and the fact that my family was oblivious to this. How could our family hail from South Carolina and someone not make that connection to slavery? How, when I learned through family anecdotes that my Grandfather’s grandmother was a slave? Or that his parents were sharecroppers? None of that made sense to me. I felt robbed and ignorant. And it angered me.

Early in our childhood, little black girls are taught that we are not enough. I learned at a young age that it was desirable to be light-skinned with hazel eyes—that it was a status symbol to be “foreign.” We hear on the radio all the time in songs that men want a “foreign” woman. Foreign is then associated with beauty and power. And as someone who already struggled with pre-existing identity issues—it was a lot to deal with.

Shortly after my Grandmother passed, I had a scare with breast cancer. I was only 24. I ended up getting genetic testing done because of my mother’s history with cervical cancer before I was born and the breast cancer that took her life at age 26. As it turns out, I don’t have the breast cancer gene but the doctor’s did find a mutation in my DNA. A mutation that they didn’t—and still don’t—know what it is or the cause. During the process of this genetic testing, the doctors had me gather as much information as I could about my family medical history—from both sides of my family. I wrote down everything I could remember about my mom’s side of the family. And I called my father and gathered as much information he could provide.

What I discovered was disturbing. Basically, cancer of all kinds runs in both sides of my family—so I’m screwed either way. But something positive came out of the experience as well—I discovered again that I wanted to know the truth about my heritage. So I decided to finally order a DNA Ancestry kit from 23AndMe.

Four weeks and a saliva deposit later—I got my results. I can honestly say that I was not surprised by my results. What my Grandparents and my father told me was mostly accurate. But what I also found was that I could now answer the questions I couldn’t answer as a kid. I am African—and now I can pinpoint from what part. My Grandfather and my father might have been right about the Native American blood that runs in our family—even if it was from many generations ago. But what everyone forgot to mention was the European blood that runs through our ancestry by way of force and slavery. I wasn’t surprised by this because I knew in my heart that my family was descended from slaves—even if my Grandfather was adamant that we were not African. 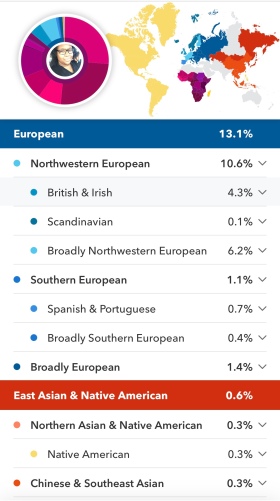 After having some time to process my results and do a little research, I felt better about myself. I felt more aligned with who I am meant to be. I knew I didn’t have to pretend to be something that I wasn’t, because now I knew the truth. I also knew that this newfound knowledge about my heritage was a way for me to reconnect with myself, my family, and my ideas about what is right and wrong in the world. It has been a liberating experience.

Self identity has always been a struggle for me. I have always been caught between who I want to be, who I think I should be, and what people see me as. None of these versions of myself ever match up. One of life’s biggest questions is “Do you know who you are?” And I am still on a journey to finding that answer. But knowing me roots—this was only the start.

iThere are no comments

There was an error retrieving images from Instagram. An attempt will be remade in a few minutes.

Begin typing your search above and press return to search. Press Esc to cancel.